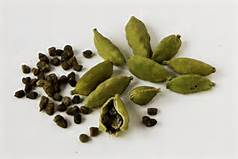 SKU:
$12.00
$12.00
Unavailable
per item
Cardamon-   The health benefits of cardamom include gastrointestinal protection, cholesterol control, control of cancer, relief from cardiovascular issues, and the improvement of blood circulation in the body. It is useful for curing dental diseases and urinary tract infections such as cystitis, nephritis, and gonorrhea. Cardamom possesses aphrodisiac properties and is also used as a cure for impotency, erectile dysfunction, and premature ejaculation.
Cardamom is a spice that originated india, Nepal, and Bhutan. Today, it is available in most tropical places in Asia, including India, China, Bhutan, Vietnam, Malaysia, Korea, and Japan. It is regarded as the Queen of Spices and is one of the most expensive spices, ranking third, the first and second being Saffron and Vanilla, respectively.
Cardamom was traditionally considered as an herb and was one of the ingredients in Ayurveda (the ancient Indian science of medicine and lifestyle) and traditional Chinese medicine. It was believed to be a remedy for teeth and gum infections, throat problems, congestion of the lungs, pulmonary tuberculosis, inflammation of the eyelids, gastrointestinal disorders, disintegrating kidney, and gall bladder stones, and was also used as an antidote for poisons and venoms.
Cardamom is rich in various vitamins and micronutrients as well. These include niacin, pyridoxine, riboflavin, thiamine, Vitamin A, Vitamin C sodium, potassium, calcium, copper, Iron, manganese, phosphorous, and zinc.
Health Benefits Of CardamomCardamom is an ideal spice with many health benefits. The most popular and well known health benefits are listed below.
Anti-Carcinogenic Properties: cardamom had a positive result in counteracting colorectal cancer to an extent of 48%.
Good for Cardiovascular Health: Cardamom ingestion results in a lower heartbeat or controlled rhythm, and control of hypertension.
Control of Cholesterol: The micronutrients found in cardamom can counteract the surge of lipids in the body. It has a benefitual influence on cholesterol levels.
Anti-Depressant: Cardamom is also posses anti-depressant properties. It can be used not only for depression, but also as a cure for various other diseases ranging from stomach disorders to pulmonary diseases.
Treating Urinary Disorders: In Ayurveda, cardamom has been used as a remedy for urinary tract diseases and infections such as cystitis, nephritis, and gonorrhea.
Protection Against Gastrointestinal Diseases: Cardamom has been traditionally used in Ayurveda, Chinese medicine and the Unani system as a remedy for gastrointestinal disorders. The methanolic extract from cardamom is the component that helps in controlling gastrointestinal disorders such as acidity, flatulence, and stomach cramps.
Antimicrobial Properties: Cardamom was thought to possess infection-fighting properties. Cardamom contains antimicrobial properties. cardamom were able to inhibit the growth and spread of some of the very dangerous microbes that regularly cause food poisoning.
Anti-Spasmodic Properties: Muscle spasms are often reported by older people. Cardamom can be used as a controlling measure for muscle spasms.
Dental Diseases: Cardamom has been used in to deal with dental problems for many centuries.
Anti-Asthmatic Property: Cardamom can also be used as a remedy for asthma and other respiratory issues.
Anti-Inflammatory Properties: According to Ayurveda, cardamom is good for muscle and joint pain. Cardamom possesses anti-inflammatory and anti-carcinogenic properties.
Detoxification: Cleanses the body to reduce cancer growth and premature aging. Cardamom is known to act as a detoxifying agent. The essential oils and biochemicals in cardamom provides detoxifying effects. cardamom was effective against cancer cells.
Improved Blood Circulation: In traditional therapies such as aromatherapy, cardamom has been used to cure symptoms of asthma and bronchitis by improving blood circulation to the lungs. The essential oil has been found to promote blood circulation in the body.
Good for Nausea and Vomiting: Cardamom is an effective tonic and stimulant and is good for calming the sensations of nausea and vomiting.
Aphrodisiac Properties: Cardamom gives out a sweet flavor, it was traditionally believed to be the cure for impotency and premature ejaculation.
For sore throats, cardamom acts as a good remedy. Cardamom and cinnamon can both be boiled in water and can be used to gargle every morning to control painful sore throats.
Breath Freshener: Cardamom seeds can be chewed as a breath freshener. Cardamom is used as an ingredient in chewing gum.
Add to Cart